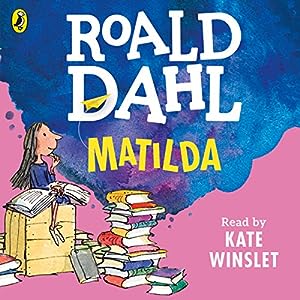 “What sort of a book would you like to read next?” Mrs. Phelps asked.

Matilda said, “I would like a really good one that grownups read, a famous one. I don’t know any names.”

Mrs. Phelps looked along the shelves, taking her time. She didn’t quite know what to bring out. “How,” She asked herself. “Does one choose a famous grownup book for a four year old girl?” Her first thought was to pick a volume by Charles Dickens or some other really good book that grownups read, but for some reason she found herself instinctively walking past that particular section. “Try this.” She said at last. “It’s very famous and very good. If it’s too long for you just let me know and I will find you something a bit shorter and a bit easier.”

“The Road to Wigan Pier,” Matilda read. “By George Orwell. I’d love to try it.”

“I must be mad.” Mrs. Phelps told herself, but to Matilda she said, “Of course you may try it.”

Over the next year, under Mrs. Phelp’s watchful and compassionate eye, Matilda read he following books:

The Road to Wigan Pier, by George Orwell
Politics and the English Language, by George Orwell
Gulliver’s Travels, by Jonathan Swift
Lies My Teacher Told Me, by James Loewen
Candide, by Francois Arouet
Tale of a Tub, by Jonathan Swift
Animal Farm, by George Orwell
There is Life After College, by Jeffrey Selingo
LinkedIn Profile Optimization for Dummies, by Donna Serdula
Getting From College to Career, by Lindsay Pollack
Job U, by Nicholas Wynman
What is the Color of Your Parachute?, by Richard Bolles
Juliette, by Donatien Sade
Milton: A Poem in Two Books, by William Blake
Jerusalem! The Real Life of William Blake, by Tobias Churton
Who Rules the World?, by Noam Chomsky
A Grief Observed, by Clive Lewis
Endgame, by Derrick Jensen
Contesting Nietzsche, by Christa Acampora
The Pilgrim’s Progress, by John Bunyan
A Critique of Atlas Shrugged, by Adam Lee
Jonathan Swift: His Life and His World, by Leo Damrosch
All Art is Propaganda, by George Orwell
The Screwtape Letters, by Clive Lewis
Jonathan Livingston Seagull, by Richard Bach
Women & Power, by Mary Beard
The Conference of the Birds, by Farid Attar

It was formidable list and by now Mrs. Phelps was filled with wonder and excitement, but it was probably a good thing she did not allow herself to be completely carried away by it all.

“I learned from reading all these books that the world is a horrible place ruled by slavedrivers who have been perfecting the art of governing over thousands of years.” Matilda said. “To govern all civilizations, you must master the skills of manipulating the people through lies and coercion; there are no exceptions to this rule.”

Is all that true, Mrs. Phelps?”

Mrs. Phelps nodded grimly. “Almost everything in politics we regard as ‘common sense’ or ‘common knowledge’ are lies. The beastly slavedrivers either give us myths their rule is just or sell us a marketing scam to get more money. It is rather difficult to tell the difference between the two these days.”

Matilda admitted the truth, “All is lost. Mr. George Orwell states how even the very language I speak has been so corrupted it rots my very consciousness. Mr. Jonathan Swift reveals our human nature makes us nothing more than Yahoos who use our shoddy wits to be as beastly as possible. Yet our beastly natures make us living beings and give life meaning to us. The rational Houyhnhnms are practically zombies.

“The writers of the career self-help books mean well, but they only reveal my doomed future. As soon as I begin school, my parents will force me into college by lying to me, promising me that you must have a college degree to get a good job or amount to anything in life. In truth, I will fall into deep debts, all to learn very little about how I could ‘get a good job’ or ‘amount to anything’. That is if I was born lucky.

“My father is a used car salesman and my mother is a ditz who plays bingo. I snobbishly sneered at my trashy parents at first, but now I have a more nuanced knowledge of their lot in life. My father grew up with no schooling or job training, so he could not go to college or get a decent job. Instead, he became a crook to make ends meet, using whatever talents he has the best way he can. My mother went to school but could not pay to college. She could work in fast food, work in the sex trade, or mooch off a man who can support her. She chose the best option she had, and she now plays bingo every day so she won’t think of how horrible her life is, something she is all too aware of.

“Mr. Noam Chomsky tells us we are doomed, and rightly so. The slavedrivers will do nothing but gain more power and oppress the people of the world more severely, using any means they can. Every day, they fight us in a gruesome class war, and not only are we ignorant; we have entire sects of people who protect our masters at every turn. All of this occurs while global warming and nuclear war loom nearer each day; Armageddon.

“Mr. Derrick Jensen proposes a radical idea. All civilizations are, by nature, built from slavery, and can only survive by robbing the earth and human beings of more resources than either can return. Civilization can never be stable, and acts like a cancer on the earth; the more it grows, the more it kills its host body until, finally, the land dies, and civilization dies with it. Mr. Jensen wants to destroy all civilizations before they destroy all life on earth.

“Mr. Clive Lewis writes wonderfully, with a deep and compassionate knowledge of the human heart, but the foundations of all religions and moralities are false, and he secretly knows it. Mr. Donatien Sade knows this, and creates a perverse philosophy so he won’t feel bad when he rapes teenage girls. Yet he fails to understand, like all smug atheists, that his philosophy is just as shaky and self-serving as any religion. Or, he purposefully created a parody philosophy to turn morals on their head and reveal the hypocrisy of civilized society. Either way, Mr. Sade secretly feels guilty about raping teenage girls, so he goes out of his way to defend himself in the most tedious manner possible.

“Only Mr. William Blake, Mr. Richard Bach, and Mr. Farid Attar give me a tiny ray of hope. They sincerely believe we can reach a higher existence, where the meaning of life is greater than violently oppressing poor people or raping teenage girls; this is the deepest most desperate desire of all our hearts. Yet they deceive themselves. They know the game is rigged so they call quits. They wish to renounce the world and kill themselves, which is reasonable, but they pretend it is all about reaching Enlightenment, which it really isn’t.

“Why did you let me read so many terrible books, Mrs. Phelps?”

Mrs. Phelps, who knew the truth the whole time, sat by Matilda to comfort her. “At first, I thought it would be better if you read the frivolous twittering writings of Englishmen who write ‘great novels’ and ‘really good books grownups read’. You are a bright child, Matilda, and surely if you read Mr. Dickens or Mr. Thackery you would impress many grown ups. They would point at you and say, ‘Look at this bright child! She reads really good books grownups read unlike the dumb kids who play video games and play outside! She reads all the sanctioned books parents, teachers, and principles want her to read! Surely, she will go to college, become a doctor or lawyer, and live in a big house in the suburbs with a husband, two children, a dog, a cat, and a goldfish!’

“I could no longer lie to a child. I wanted to educate you on what being a grownup is really like. I did not want you suffer through decades of despair, disappointment, and indignation, only to learn the truth too late. This is what real reading, real education, is like.”

“What should I do, Mrs. Phelps!” Matilda cried. “Is there an answer to the darkness?”

Mrs. Phelps put her hand on her chin, thinking for a very long time, considering perhaps there was an answer, a way to truly live a good life. “I believe Mr. William Blake and Mr. Friedrich Nietzsche may point to the way, but the journey will be rough. We will travel through a great black sea of terrible waters. We will have to challenge everything we have ever known to find the other shore. Are you ready, Matilda?”

Matilda nodded, the bravest human being Mrs. Phelps had ever seen. “Yes,” Matilda said. “I am ready.”